Following the RBNZ decision last week, this week, it is the turn of the Riksbank to decide on monetary policy. We don’t expect any policy action, but we will look for signs as to how the Bank plans to proceed with its stimulus efforts. Investors are also likely to pay extra attention to the FOMC meeting minutes and the US employment report for June as they try to assess the likelihood of more policy easing by the Fed.

Monday appears to be a relatively light day. We only get Germany’s preliminary CPIs for June, Canada’s building permits and the US pending home sales, both for May. The CPI rate is forecast to have remained unchanged at +0.6% YoY, while the HICP one is anticipated to have ticked up to +0.6% YoY from +0.5%. This would raise speculation that the CPI rate for the Eurozone as a whole, due out on Tuesday, may also stay unchanged or just tick up.

With regards to Canada’s building permits, there is no forecast available, while the US pending home sales are expected to have rebounded 19.7% in May after sliding 21.8% in April.
On Tuesday, during the Asian morning, we get the usual end-of-month data dump from Japan. The unemployment rate is forecast to have risen to +2.8% in May from +2.6%, while the jobs-to-applications ratio is anticipated to have declined to 1.23 from 1.32. Preliminary data on industrial production are forecast to show another decline in May, but at a slower pace than in April. Specifically, IP is expected to have declined 5.6% mom after falling 9.8%.

From China, we get the official manufacturing and non-manufacturing PMIs for June. The manufacturing index is expected to have slid to 50.4 from 50.6, while no forecast is available for the non-manufacturing print. Another month of expansion would be pleasant news, but we doubt that these numbers will prove major market movers. After the new flare-up in infections from the coronavirus in China, market participants may prefer to wait for the July prints. It would be interesting to see whether more restrictive measures will be introduced and whether this will result in a second hit to the world’s second-largest economy. 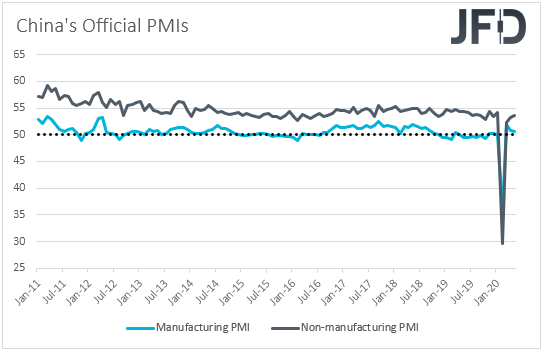 Ahead of the EU open, the UK’s final GDP for Q1 is coming out and it is expected to confirm its preliminary print of a 2.0% QoQ contraction. That said, we expect this release to pass unnoticed as we already have data showing how the UK economy has been performing in Q2, with the monthly GDP for April pointing to a 20.4% contraction.

Eurozone’s preliminary CPIs for June are also coming out. The headline rate is forecast to have stayed unchanged at +0.1% YoY, while no forecast is available for the core rate, which, in May, stood at +0.9% YoY. At its latest meeting, the ECB decided to increase its pandemic emergency purchase program (PEPP) by EUR 600bn to a total of EUR 1350bn, extending the horizon of the purchases to “at least the end of June 2021”, with officials staying ready to adjust all of their instruments as appropriate, to ensure that inflation moves towards their aim in a sustained manner. On top of that, last week, the ECB said it would offer EUR loans to central banks outside the Eurozone. 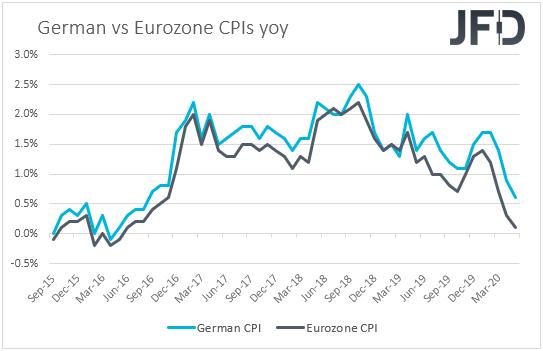 The preliminary PMIs for June came in better-than-anticipated, but with the bloc’s composite index staying below the boom-or-bust zone of 50. Thus, combined with this, both inflation rates staying well below the Bank’s objective of “below, but close to 2%”, may keep the door for further easing by the ECB in the foreseeable future wide open.

Later in the day, we have Canada’s monthly GDP for April and the US CB consumer confidence index for June. Canada’s GDP is forecast to have contracted 12.0% mom after deteriorating 7.2% in March, while the US CB index is expected to have risen to 91.6 from 86.6.

On Wednesday, the main event may be the minutes from the latest FOMC meeting. At that gathering, the Committee decided to keep interest rates unchanged and noted that they will continue to increase purchases of bonds and mortgage-backed securities “at least at the current pace”, something suggesting that purchases can accelerate again if deemed necessary. Officials already announced tweaks to their bond purchases a few days after the meeting, widening the range of eligible assets to include all US corporate bonds. On top of that, when testifying before Congress, Fed Chair Powell himself said that there is a “reasonable probability” that more policy support would be needed. Thus, we will dig into the minutes to see whether other policymakers were in favor of further easing in the foreseeable future. If so, equities may gain on hopes for more central-bank support, while the dollar and other safe havens may come under selling pressure.

Earlier in the day, during the European morning, we have the world’s oldest central bank deciding on monetary policy, the Riksbank. When they last met, policymakers of this Bank decided to continue purchases of government and mortgage bonds up to the end of September 2020 and to leave the repo rate unchanged at 0.0%. They also said that the measures will be adjusted to economic developments. After the meeting, GDP data showed that economic activity slowed to +0.1% qoq in Q1 from +0.2%, but this was at a time when expectations where pointing to a 0.6% qoq contraction. The latest inflation data showed that both the CPI and CPIF rates rebounded to 0.0% yoy in May from -0.4%, while the core CPIF metric showed that underlying inflation rebounded to +1.2% from +1.0%. Therefore, although we may not get any policy changes at this gathering, it would be interesting to see whether the better-than-expected GDP data and the rebound in inflation would trigger any discussion with regards to scaling back QE purchases. 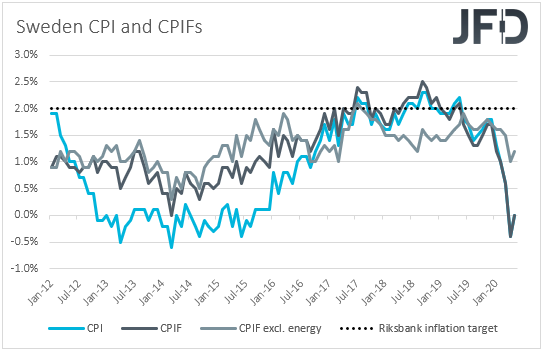 As for Wednesday’s data, during the Asian morning, we have Japan’s Tankan survey for Q2 and China’s Caixin manufacturing PMI for June. In Japan, both the large manufacturers and non-manufacturers’ indices are expected to have declined to -31 and -18 from -8 and +8 respectively, while China’s Caixin PMI is anticipated to have slid to 50.5 from 50.7.

During the EU session, we get the final manufacturing PMIs for June from the Eurozone and the UK, but as it is always the case, they are expected to confirm their preliminary estimates. Later in the day, from the US, ahead of the Fed minutes, we get the ADP employment report for June. Expectations are for the private sector to have gained 3mn jobs, after losing 2.76mn in May. This would raise speculation that the NFP print, due out on Thursday, may also come close to that number. Indeed, the forecast for the NFP is currently at 3.07mn. However, although the ADP is the only major gauge we have for the NFPs, it is far from a reliable predictor. Even last month, when the ADP revealed 2.76mn job losses, the official employment report showed that NFPs increased 2.51mn. The final Markit manufacturing PMI and the ISM manufacturing index, both for June, are also due to be released. The final Markit index is expected to confirm its preliminary estimate, while the ISM one is anticipated to have risen to 49.0 from 43.1. 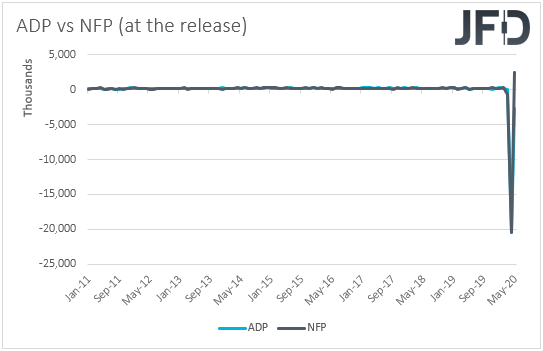 On Thursday, all lights may fall to the US employment report for June. The reason we don’t get the report on Friday is that US markets will be closed in celebration of Independence Day. Nonfarm payrolls are expected to have increased 3.07mn after rising 2.51mn in May, while the unemployment rate is expected to have declined to 12.3% from 13.3%. Average hourly earnings are forecast to have declined 0.6% mom after falling 1.0%, something that, barring any major deviations to the prior month prints, will drive the yoy rate down to 5.3% from 6.7%. Such a report would be an encouraging development as it would show that the US economy is on the road to recovery, despite the nation’s infected cases from the coronavirus keep increasing at a fast pace. Such a report, combined with the Fed’s willingness to do more in order to stimulate the US economy, could prove positive for the stock market, and oddly, negative for the US dollar, which has been acting as a safe haven in the aftermath of the coronavirus outbreak. 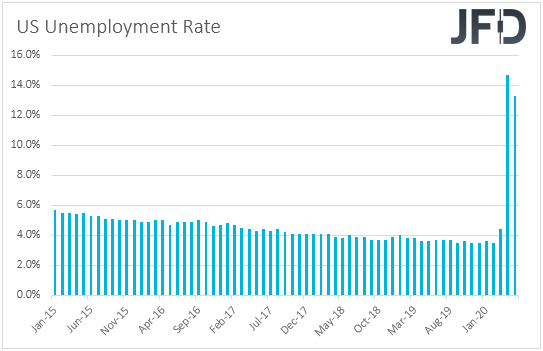 Finally, on Friday, US markets will be closed in celebration of Independence Day.

As for the data, during the Asian morning, Australia’s retail sales for May and China’s Caixin services PMI for June are coming out. Australia’s retail sales are expected to have rebounded 16.3% mom after tumbling 17.7% in April, while no forecast is available for China’s Caixin index. Later in the day, we have the final services and composite PMIs for June from the Eurozone and the UK. As always, expectations are for confirmations of the initial estimates.

previous post
Man arrested over fatal shooting in Kentucky park at center of protests
next post
Emini In Breakout Mode At End Of Second Quarter, But….

In a first, Trump dons masks in visit to a military medical facility