Week Ahead: Overbought Stocks Likely To Move Higher; USD Could Break Out

Stocks may be showing no sign of slowing down: the Dow Jones, S&P 500 and NASDAQ all finished the trading week at record highs. Nevertheless, an array of red flags should keep investors in check.

European stocks also ended the week with another record, their fourth straight, no doubt fueled in part by positive data from the world’s two largest economies. Additionally, easing trade tensions against a backdrop of central bank stimulus and a Fed that’s committed to staying on hold seem to have left investors with little choice but to keep bidding equities higher.

The S&P 500 and NASDAQ Composite each notched their eighth straight record. For the 30-component Dow, it was the fourth consecutive all-time high. 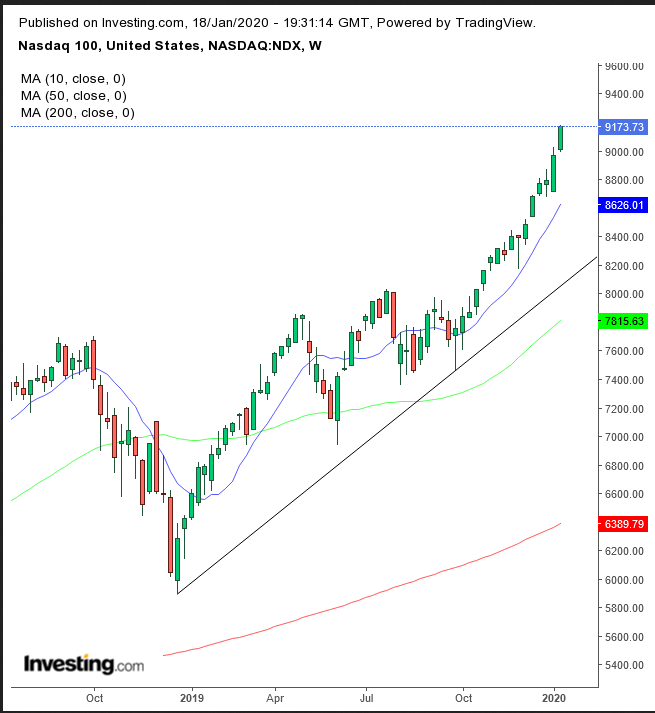 The NASDAQ 100 climbed for its sixth straight week, crossing over the 9,000 level for the first time in its history. 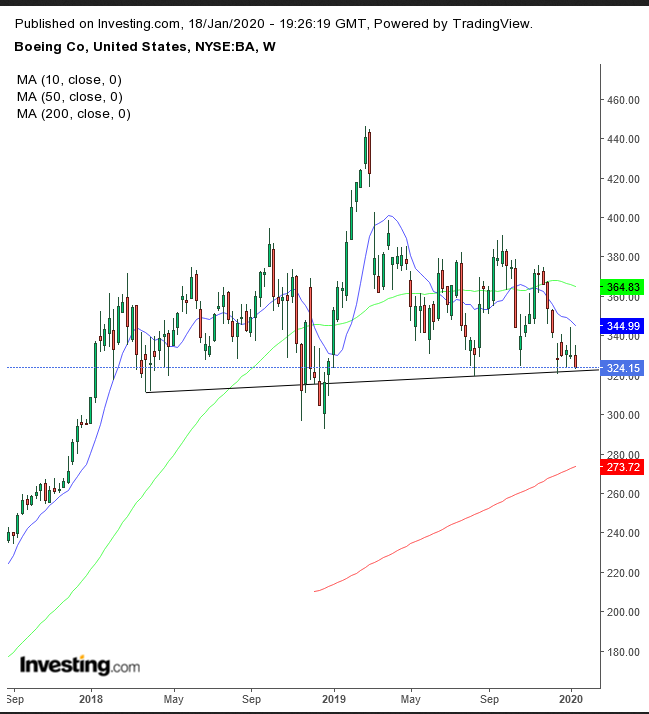 Conversely, Boeing (NYSE:BA), the U.S.’s beleaguered aeronautics giant, closed well off its highs, with shares plunging to their lowest since Aug. 14, after Fitch downgraded the stock to A- from A. The move was due to a report of the discovery of new software flaws, further extending the grounding of the company’s 737 MAX.

Technically, the stock inched toward completing a top. 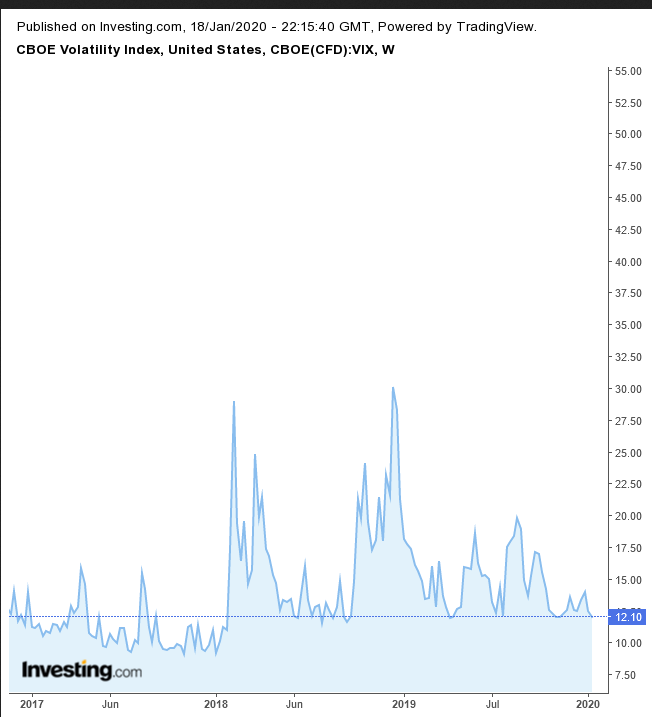 The VIX volatility index is hovering just above the April low, right before the S&P 500 fell 7%. An inch below that, the VIX’s September low preceded the S&P falling as much as 20%.

The Ned Davis Daily Trading Sentiment Composite, which measures levels of trader optimisim or pessimism, has hit 80, putting it at “excessive optimism” levels. While this doesn’t necessitate a correction, it will probably require strong earnings results to keep stocks at record levels. Particularly salient, the S&P 500 has fallen 5% on average since 2006 whenever the composite crossed 62.5 levels, much lower than where they are right now.

Strong Data Propels Dollar, But Investors Could Be Hedging Their Bets 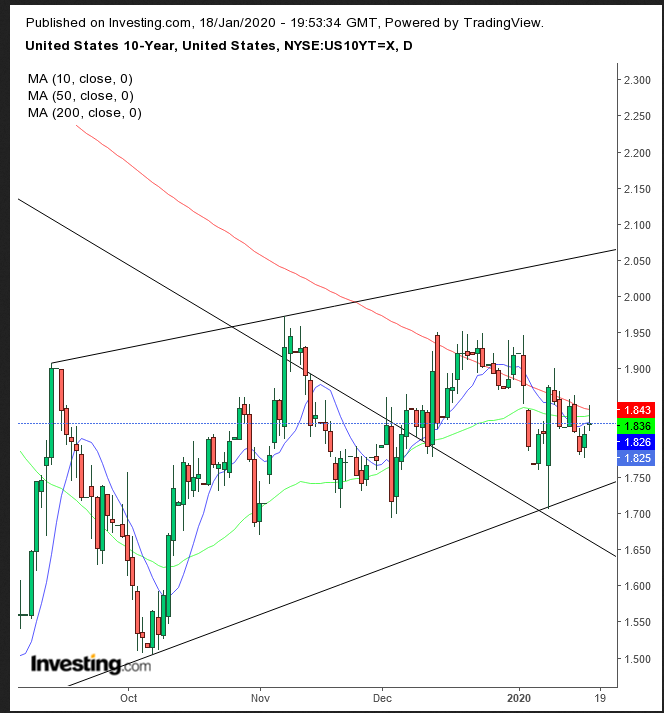 Still, amid all that optimism, 10- and 30-year yields couldn’t get passed the 200 DMA, which is still guarding the long-term downtrend. 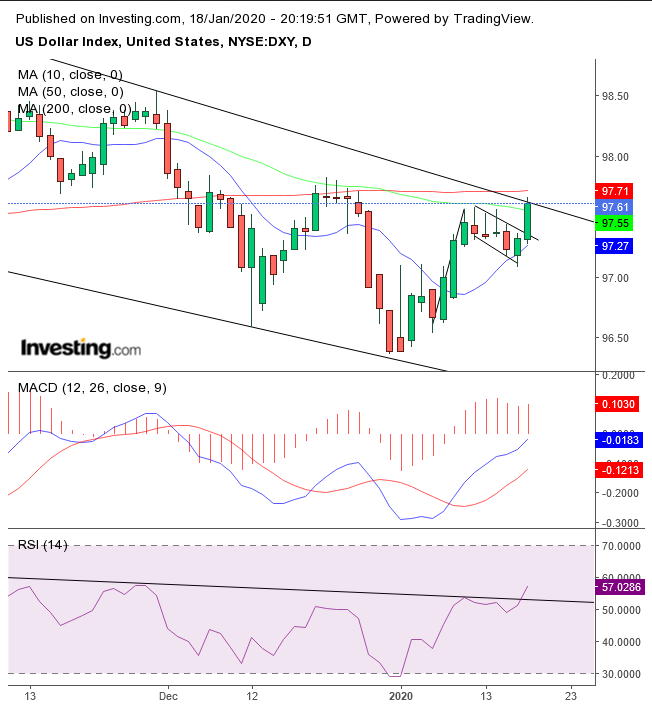 Positive U.S. data drove the dollar to its highest since Dec. 25. The global reserve currency stopped right below the top of a falling channel since the Oct. 1 top and the 200 DMA.

However, the USD may have broken to the topside of a falling flag, bullish after the 1% percent jump in the three consecutive gains from the low of Jan. 6 to the high of Jan. 9. Both the MACD and RSI are providing bullish signals, suggesting the dollar will cross over the 200 DMA and break out of its falling channel.

All times listed are EST

22:00: Japan – BoJ Outlook Report and Interest Rate Decision: no change expected to the current rate of -0.10%.

Recruiting timelines for private-equity associates are looking totally different this year. We talked to 5 headhunters to get the latest intel.

Europe’s second wave is here: France and the UK recorded their highest daily COVID-19 cases ever, and the EU warned that some countries have worse outbreaks than in March

Costco is thriving during the coronavirus pandemic: It just posted a $14 billion jump in annual sales

Big Law is going through a huge transformation: here’s the latest news on pay, hiring, and career prospects