After seeing the value of their holdings doubled during the past year, one logical question for investors in the shares of Apple (NASDAQ:AAPL) is whether it’s time to take some risk off the table and reduce their holdings of this mega tech stock?

The proponents of this call have a point to make. The stock has surged more than 100% in the last 12 months to hit another record high on Friday, closing at $310.33. Indeed, Apple’s gains are now the largest among the group of top five tech giants that includes Amazon.com (NASDAQ:AMZN) and Google’s owner Alphabet (NASDAQ:GOOGL). 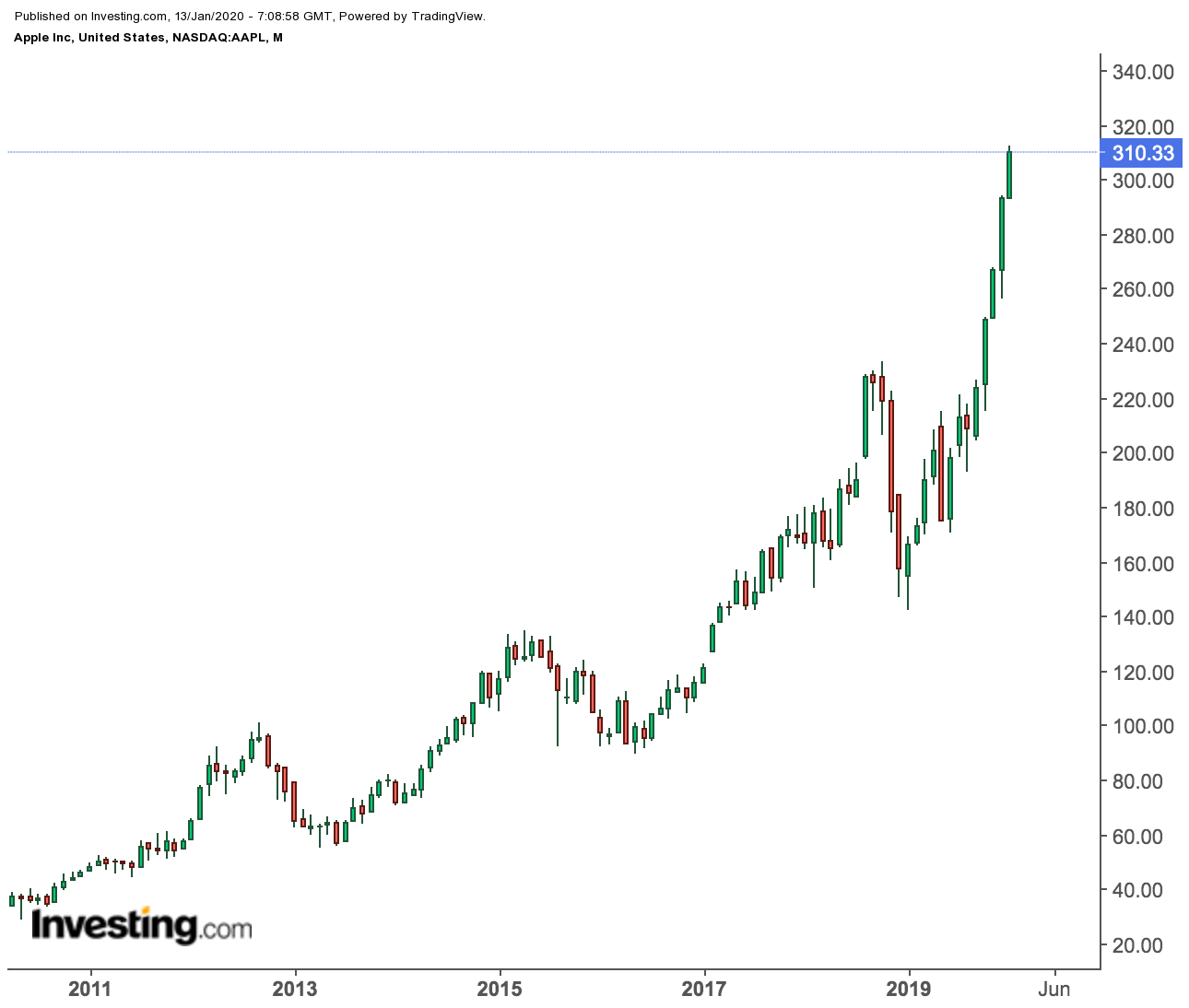 For the first time since 2011, shares of the iPhone maker have been trading at a higher price-earnings ratio than the S&P 500 after the stock’s valuation almost doubled in 2019. It’s a reversal from the previous nine years, when concerns over a lack of product innovation kept the stock at a persistent discount to the market.

After a powerful rally in 2019, Apple is trading at 26 times last year’s earnings, the highest level since 2008. That compares with a multiple of 24 for the S&P 500. The magnitude of Apple’s current rally has raised concerns that the stock is due for a correction.

At yesterday’s price, the stock is trading more than 12% higher than analysts’ average price target. Seven of the 49 analysts tracked by Bloomberg that cover Apple have sell ratings, the most in at least nine years.

Despite these concerns, Apple’s persistent strength shows that investors have started to ignore a bearish scenario which calls for avoiding the company because its growth is too dependent on iPhones. The flagship product still contributes to about half of the total sales, making the business vulnerable to a shift in consumer preferences and a potential slowdown in economic activity.

One of the biggest factors that’s helping a strong bull case for Apple is its fast evolving ecosystem of products and services which is helping the company to deepen its penetration. Apple’s services unit, which includes growth businesses such as the App Store, Apple Pay and Apple Music, is picking up and contributing more each year to the company’s total sales.

According to analysts’ forecasts, the number of iPhones sold this year will be well below the total number sold during peak iPhone years of 2015, 2016, 2017 and 2018. And yet, Apple is expected to generate record revenue this year of more than $275 billion thanks to its evolving business model.

Apple’s sales from services are forecast to rise to $54 billion in fiscal 2020 and account for a fifth of total sales, up from 18% at the end of 2019, according to analyst data compiled by Bloomberg.

In addition to these growth drivers, the macro environment, which became hostile last year following the U.S.-China trade spat and the growing risk of recession, is improving fast. The stock market is rising, volatility is low, and employment is growing.

The U.S. Federal Reserve is firmly on the sidelines and it seems unlikely that President Donald Trump would purposely cause any market shocks in an election year. That positive backdrop is prompting consumers to spend more on gadgets globally. Apple’s iPhone sales in China, the company’s biggest foreign market, rose more than 18% last month, according to CNBC calculations.

Apple’s push to reduce its reliance on iPhones is showing clear signs of success. That means the company has developed a very robust ecosystem built around its services business. This momentum is weakening the bear case against Apple stock and fueling the ongoing rally. In this highly favorable environment, in our view, investors would do better to hold on to their Apple shares instead of taking profit.